Gap or No Gap? The challenge of aligning words and deeds 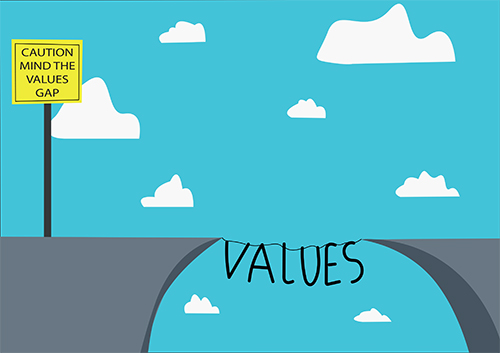 “It’s in an emergency that an organisation’s true values become clear” Mark Rowland for the Chartered Management Institute in April.

“Covid-19 means there is more focus on people and human rights now, and we are seeing the companies that continue to look after their people – be it in their operations or supply chains – will lead the global recovery from an employee engagement and brand perspective” Pauliina Murphy of World Benchmarking Alliance in June.

Unsurprisingly there’s lots of chatter saying acting on core values are vital to organisational survival. Some commentators reckon values are more important than ever….. I don’t entirely agree.

Every organisation has a range of values which matter most collectively to the people of that place. This has always been so. Those values are the energies that drive problem solving, creativity, kindness and fuel determination in ways that no rule book or handbook ever could.

There is danger ahead: not from a lack of values per se but from discernible gaps between declared core values and the actions which signal that different values are being lived out in everyday interactions. Kareline Daguer of PwC says it well “This crisis will test firms’ ability to live up to their stated ambitions and core values. Now, more than ever, winning or losing may depend on whether you were able to do the right thing at the right time for both your employees and your customers.”

What that “right” thing looks and sounds like depends on the values your organisation says it holds as core and what it actually holds as core. When an organisation visibly makes decisions and takes actions which honour the stated values (and even better explains how the values have been operationalised in that process) then we experience that company/charity/business as authentic.

Be in no doubt, as the world turns to life post pandemic, to be experienced as authentic will be powerful and comms folk may find themselves expected to work their magic in that pursuit. Associate Professor Juan-Carlos Molleda in his 2010 review of authenticity in PR and Communications says “authenticity claims must capture the experiences, aspirations and expectations of the involved segment of society that organisations aim to engage; otherwise, a clash of values and beliefs may occur and the strategic public relations and communication management efforts may be lost”.

Another thing to bear in mind here is that when a population of we humans feels uncertain, or even afraid, of something that appears to be outside of our control we have a natural tendency to look towards “institutions” (in the broadest of senses) for guidance and reassurance. In April 2020 the researchers at Edleman undertook a follow up to their annual trust survey which had been conducted in January. They found that trust in government globally had undergone a steep rise reaching its highest level for a number of years. (Whether that would still be true now I shall leave you to decide for yourself). Trust in business also rose but alongside that there were also rising concerns about whether people were being put before profit in the way that the public felt they should be.

Here’s an interesting definition of trust from Trust Across America

“ A by product of strong core values that are practiced and reinforced daily”.

So bear in mind that both inside and outside your organisation eyes are watching and ears are listening for signs that words and actions add up, make sense and fit the current reality. Take care to make it true.

Albert Einstein (who was a guy who knew a lot) said “whoever is careless with the truth in small matters cannot be trusted with important matters”. Organisations run on trust – the trust of employees and of customers, of investors, suppliers and partners. If our core values are not experienced to be true through our actions then trust will be a casualty.

So as we turn our thoughts to World Values Day while getting ready to #buildbackbetter or whatever rallying call is being used where you are, what constructive actions might we take on the values and authenticity front?

Everyone everywhere has had a very personal experience of the pandemic. One cartoon I saw recently showed us all sailing the same COVID19 ocean but people were in very different boats from luxury yachts or plush cruisers to folded paper boats or even simply clinging to pieces of floating wreckage.

That personal experience puts people in different places right now. For some it has reinforced that things they cared about truly do matter very much and they have a renewed sense of focus potentially leading to an increased determination to act in alignment with their values more consciously from this point on. For others it has thrown into stark relief that some (many) things they thought they cared about do not matter even half as much as other things they had been taking for granted. For these folk the coming months will likely be ones of reappraisal and possibly reorientation. Again we will likely see individuals, families and communities seek to be more consciously values based as greater meaning is sought from the still limited menu of everyday life choices.

Will the same reflective practice prove true for organisations too I wonder….. I suspect those that do will be in better shape for the long haul ahead than those who blindly stick to what used to be out of desperation to get ‘back to normal’.

I want to give the last words to Prof Mary Collins and Assistant Professor Sarah Garlington who have proposed three core values upon which we can all act to emerge from “coronavirus mode in ways that achieve a better new normal: compassion, solidarity and justice” – sounds good to me.

Jackie Le Fèvre has specialised in values based practice since 2005 building up particular expertise in the Minessence Values Framework and storytelling methods of eliciting lived core values in organisations. In March this year she embarked on another adventure to explore the connections between wellbeing and values and to do this through studying for a PhD.