Values-based leadership in a pandemic 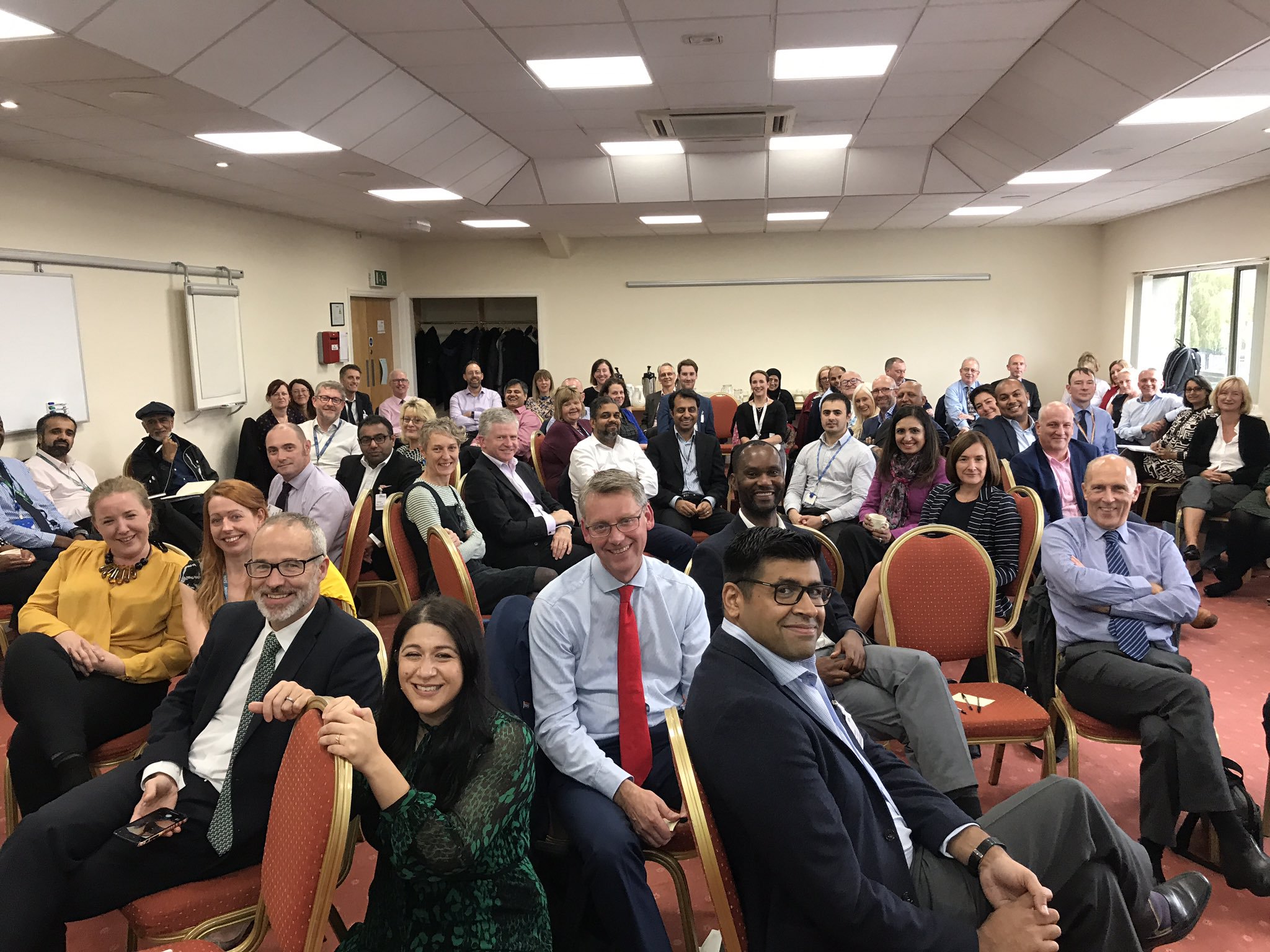 Working in systems to address inequalities

I meet every new starter in my Trust as part of their induction. The focus is on the values of the organisation, which should be familiar as we recruit staff for their values, with a values-based induction and appraisal as a means of fostering the right culture. One thing that I always reinforce in this conversation – that our values shape the way we work and are where we go for guidance when there is no clear “right answer” to the issue in front of us.

This has proven very true during a global pandemic that has stretched our people, organisations, and systems beyond what we thought would be possible. As the leader of both a Trust and an Integrated Care System (West Yorkshire & Harrogate Health and Care Partnership covering 2.7million people) I have seen this first-hand.

The pandemic has undoubtedly meant tough choices have had to be made and there are so many examples of this – some services being curtailed, staff being redeployed, visiting stopped for worried families, redistribution of personal protective equipment (PPE) arranged to provide mutual aid, new services created in short order and people who may be most at risk prioritised wherever possible. In making tough choices, we have benefited from having a mature system, made up of NHS organisations, councils, voluntary community organisations, charities, hospices, Healthwatch and our communities. This Integrated Care System (ICS) has allowed very good links to be made between the Local Resilience Forum (LRF) and the health and care system. The LRF with its wider role in public service, housing, education, policing, and security has itself benefitted from the health and care system’s role in supporting people, particularly those who are vulnerable to the impact of COVID.

These elements of a good emergency response infrastructure have been necessary, but on their own they are not sufficient. What has seen us through the pandemic in reasonable shape has been system working in the service of others backed by ethical frameworks for decision making with mission, values, and behaviours as a guide. 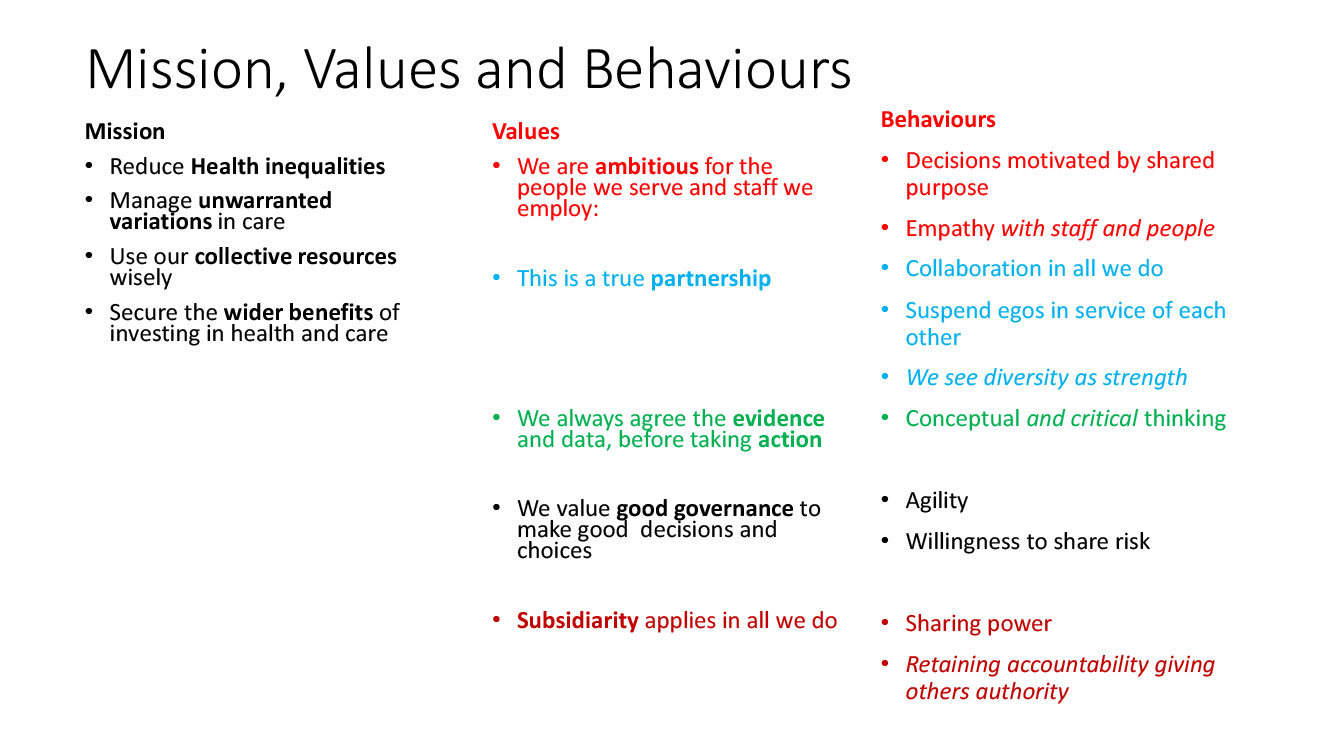 A very real example is that during the pandemic it emerged that people from different minority ethnic backgrounds were disproportionately impacted by the virus, as well as increased morbidity and mortality – this was apparent in economic indicators like unemployment. As a system with a clear mission to reduce health inequalities, where we are ambitious for the people we serve and the staff we employ, we felt motivated to take decisive action to address these issues. We have always seen diversity as a strength and knew that inaction would hamper our abilities to recover. We very quickly decided to commission Professor Dame Donna Kinnair to undertake a rapid review of the actions we were taking to address race inequity, with carte blanche to recommend what more could be done if we were to ensure that people from minority community backgrounds were not disproportionately impacted. This agility and willingness to share risk, meant we had to suspend our egos and not be defensive about the findings. Having seen the evidence and heard the stories of our staff and people, this was easier than it sounds.

This commission recommended actions on housing, employment, mental health, and how commissioning choices are made. It led to stronger race equality networks, improved representation on all decision-making fora, a new fellowship programme to ensure that people had the experience to progress and a substantial anti-racism movement #WYHRootOutRacism. I am particularly proud of the latter with over 500 organisations/community allies signing up before the movement had even officially started (with over 560 one week later). The campaign material for the movement was built with insight from and coproduced by staff and people from our communities, and they themselves shared their lived experiences in hard hitting and impactful ways. We shouldn’t take for granted the impact that this has on our organisations, on our staff and in our communities. Comments shared included “Racism started before I was even born. It’s been always there, having to work twice as hard, always working harder to be seen, to feel visible; not as valued as your White colleagues and that just became a standard.” One colleague also gave a very personal reflection that they were often the only person of colour in a room full of white people and that they have been accused of supporting this agenda because they had a vested interest in it. By seeing so much support for the anti-racism movement, this individual now feels supported and knows that White colleagues can see that this is everybody’s issue and not just their own.

In many ways this work could be contentious and challenging, likely to stir up trouble and be the subject of disapproval from certain sectors of society. By basing our work on our shared mission, values, and behaviours, we have found the opposite. A sense of collaboration and agreement that instead of simply admiring the problem, we should do something about it.

This kind of approach becomes easy to replicate so when a study showed that people with a learning disability were eight times more likely to die from COVID, we again were swift to act. This time we did an internal review of the work and evidence, before acting, as part of our Learning Disability Challenge. This was done through a true partnership of providers and commissioners and people. The result was a new offer and immediate action which has led to significant improvements in health checks for people with a learning disability in every part of West Yorkshire, premium treatment on waiting lists for people with a learning disability in our hospitals and bespoke clinics to ensure maximum uptake of COVID-19 vaccine. By focusing on our mission, values and behaviours, these tough choices became the easy choice.

We now have a Health Inequalities Academy which ensures that these approaches are embedded in all we do. This is a positive example of the culture we foster being supported by the infrastructure we need. Together, these are necessary and sufficient.

As integrated care systems become statutory bodies, we are developing our organisational development plan to ensure that this focus is maintained. Our culture and our infrastructure will help define the impact we can have. And our values will continue to be our guide. 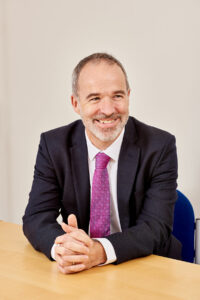 Rob has worked in healthcare since 1990, taking on national leadership roles in the Department of Health on policy, transformation, and delivery. He has been a director for both the Prime Minister’s Delivery Unit in the Cabinet Office and a national public/private partnership. Having proven to be a successful Chief Executive in the NHS since 2007, he is currently the Lead Chief Executive of the West Yorkshire and Harrogate Health and Care Partnership (ICS), having previously been Chief Executive of South West Yorkshire Partnership NHS Foundation Trust between 2016 and 2021, and the NHS Confederation between 2014 and 2016. Rob is an active member of the NHS Assembly and contributes to a number of national programmes.

Rob is defined by a values-based approach to leadership. He is a visiting Professor at Leeds Beckett University and was proud to be made a Fellow of the Queen’s Nursing Institute in 2014. In May 2016, Rob became an Honorary Fellow of the Royal College of General Practitioners. In 2020 he was made a Commander of the Order of the British Empire (CBE).