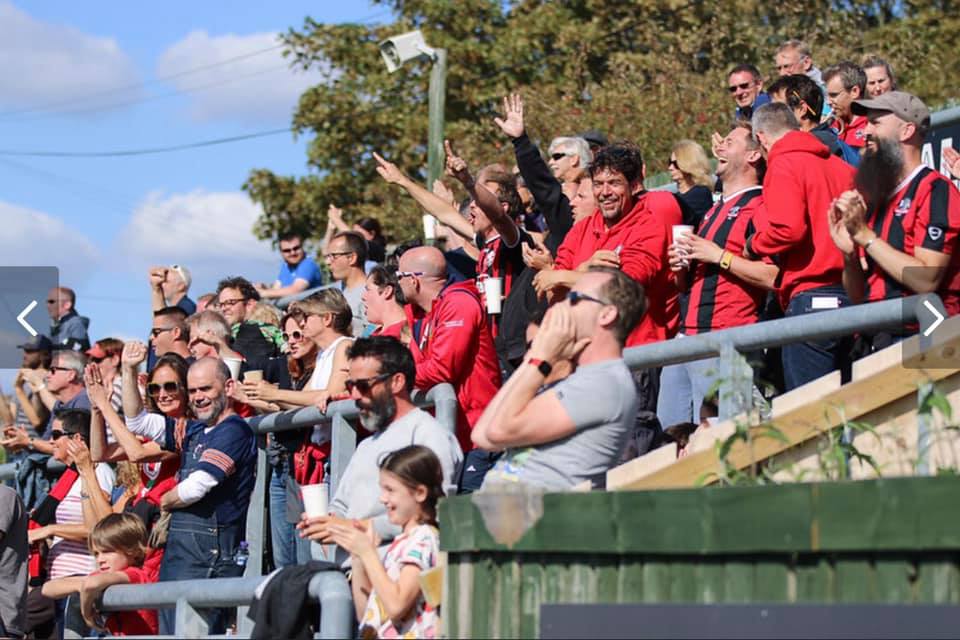 Every day players from Lewes FC Women make their way to the club’s all-weather pitch for training, where they run, bend, stretch, jump, kick and sweat. Except for Tuesday, their day off, when they relax a bit, drink coffee with friends in town, walk a dog, cook, shop, clean, read, watch TV – things us non-elite athletes do on a weekend. In town they wear Lewes branded kit, are impeccably polite, and always willing to chat, especially about the club, their fixtures, how the season is going. Often you’ll see them in pairs or small groups, looking like champions off the pitch.

The club these players joined is purpose-driven and values-based, but, as a team, these young women decided to work out their own values three seasons ago. They chose: Inspirational;

Professionalism; and We Over Me. Interestingly, three seasons ago they were semi-professional, but have now managed the team’s transition to being fully pro by putting those values out there. Paid and resourced equally to the men’s team, they are indeed full-time footballers playing in the second highest tier of English women’s football. And certainly, you’ll rarely detect an ego amongst this lot. If you’re on the bench you’re as much a part of the team as the 11 on the pitch. And if you score a goal, it’s not just yours –  as striker Emily Kraft recently said publicly to striker Emma Thomson of a winning goal against West Ham: ‘That was your goal too. If you hadn’t gone deep, I couldn’t have gone wide’. 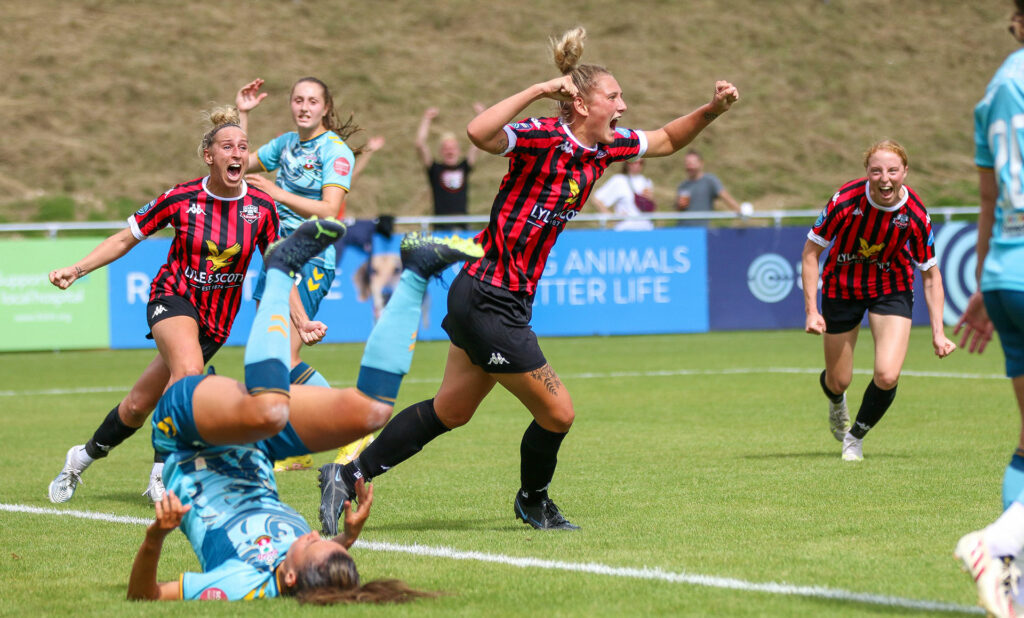 Their male counterparts at Lewes FC Men have skin in the values game too. They are intent on calling out misogyny, sexism, racism, homophobia…any of the isms in fact. Defender Mitch Nelson recently stopped playing when an away fan shouted homophobic abuse at a Lewes player. Incredibly, Nelson was booked for time-wasting but praised by his Manager Tony Russell who stood by his player saying he was ‘proud’ – and this time it wasn’t about the football. In fact, when it comes to misogyny, the players have a #CallHimOut campaign … 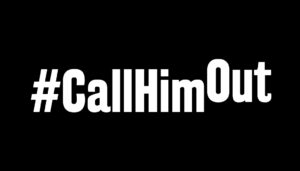 From the outside Lewes Football Club must seem an odd sort of a football club. There’s an 8-foot-high statue of 18TH Century female pirates in one corner, and a community garden run by midfielder Bradley Pritchard in the opposite corner (named ‘Brad’s Pit’ by a fan in the Netherlands). If you’re Player of the Match you might get a punnet of tomatoes from Brad’s Pit, or maybe a bunch of flowers from a local florist – one of the club’s many community partners. The ground boasts beach huts instead of corporate boxes, and fans can choose between traditional pies or fries loaded with vegan toppings on matchday. There’s Prosecco on tap in the bar, and signs telling you where you might like to breastfeed as you go through the turnstiles. The club is living, breathing, eating and drinking its values. Sometimes there’s pre-match chanting practice at women’s matches, as lots of the audience are new to the beautiful game. And yes, the board of directors is half female, alongside a senior management team comprising two women and one man. 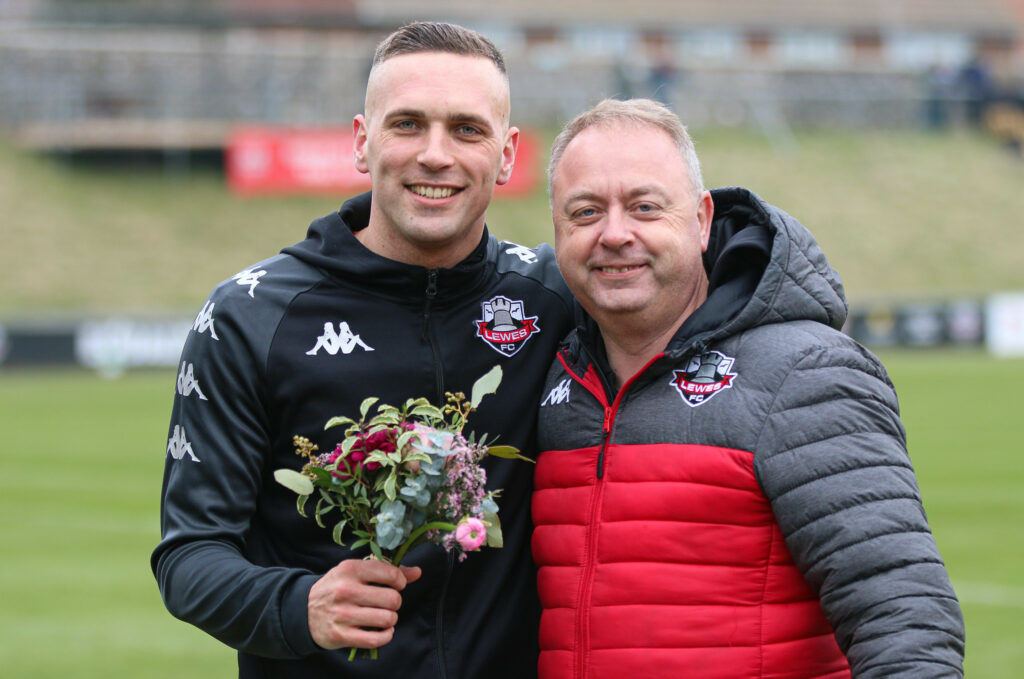 But let’s take it back a notch.

In 2009 when the country was having its last financial crisis, the club was on the brink of ruin and going out of business. Six fans stepped into save it, buying it for a nominal pound, paying off all its debts, and mutualising it. Anyone could own the club for £30 (now £50) a year and buy one share, getting a vote as to who should be a board director. They would also be entitled to stand for the board, which would be democratically elected from amongst the ownership. No-one could own more than one share. And so the football club became a collective. This mutualisation focussed the club values overnight. Over the years the board asserted that as a 100% community-owned club, it was a community asset, and as such the twin missions became to ‘use football as a vehicle for social change’ and to ‘be exemplary on the largest achievable platform’. 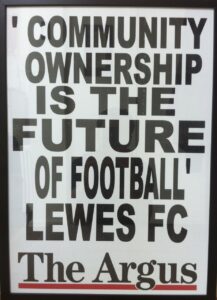 In 2017 the board, true to its mission, made the radical decision to raise the women’s playing budget to match the men’s, becoming the first club in the world to resource and value women equally to men: and ‘Equality FC’ was born. This wasn’t easy, and there were people who needed convincing, a concept to be proved, and casualties along the way…..but 5 years later revenues have increased five-fold, gates have doubled on the men’s side, quadrupled on the women’s, sponsors are aligning with the club’s values, and ownerships are growing.

We are a collective united around a way of doing things differently to the norm. Our owners, when asked over recent years, tell us they signed up because of the club’s honesty, transparency,

community, friendliness, inclusion, boldness, a pioneering spirit, commitment, hopefulness, optimism, determination, and being part of a movement. They are fed up with corruption in football,

ridiculous amounts of money, and disdain for fans. Some of our owners just like their football of course – and that’s brilliant too – we’re a football club after all.

We publish our club strategy on our website for all to see and hold us to, and are proud of our ambitious goals. Our women’s team beat Liverpool last season, and we won an award from UN

Women UK because we are an ‘extraordinary organisation who has advanced gender equality especially by engaging men’. Football? Campaigning? We do both and they drive each other. 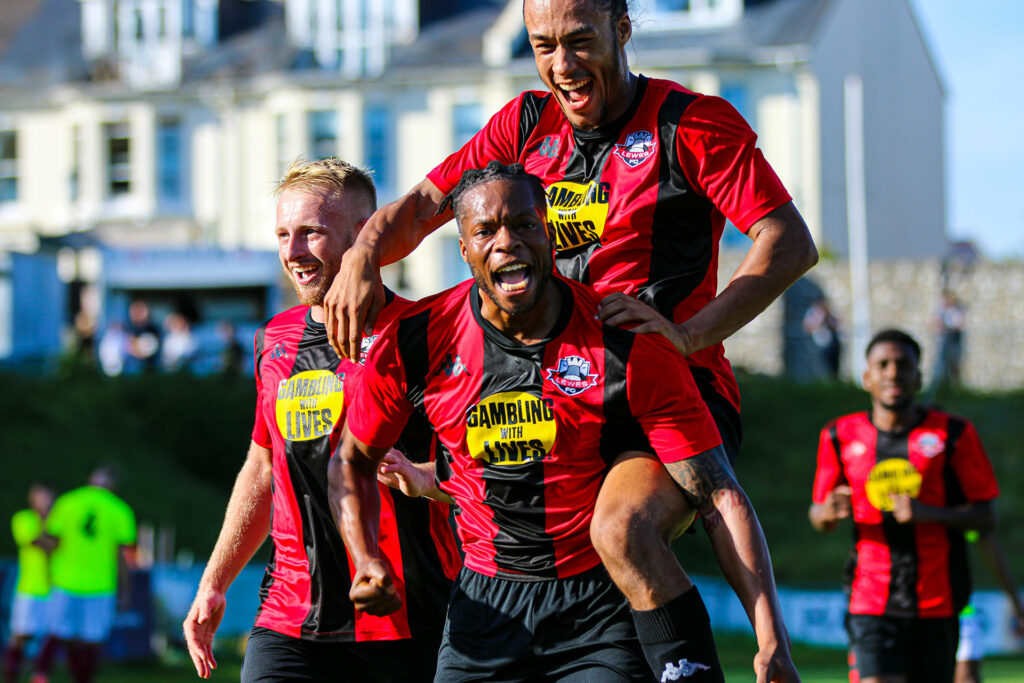 Rooks owners (did I mention we are named after the birds who nest around the Dripping Pan?) are by and large a purposeful bunch. In fact, a recent survey by Honoco agency revealed that:

I write as an elected director coming to the end of a 3 year term, and looking forward to continuing as an Ambassador for this club – which is for, of, and by, the people – and I reflect on how confident all this sounds. So, I want to finish this article with a personal explanation for where that confidence comes from, but also how there is jeopardy here too.

Our club is built on strong values. As a person I am guided by my own values: knowing them, and then acting on them, makes me strong. (If you’ve not done it before, sit down quietly and have a think about what is important to you, what you’d fight for, what you couldn’t live without – those are your values, and knowing them lends you authority). This club talks about its values, but more importantly it constantly shows its commitment to them by practically applying them to football.

Hence, gender equality; hence the anti-gamblification of football work; hence #CallHimOut; hence our Football Therapy mental well-being team; hence our work with E,D and I; hence the transparency of our accounts, strategy, decision-making, etc. I could go on. There may be humour at Lewes FC but even the gimmicks have meaning. Our daily deeds instil confidence in what we stand for and who we are.

Lewes FC may have ‘proven concept’ but we have ambitious goals and to achieve them will be a struggle. It won’t be easy for a small club like Lewes to reach and compete in the Women’s Super League, or for our men to reach the hallowed Football League, but with enough owners signing up we can and we will. So, we continue to shout far and wide about what we do, why we do it, and ask each person we meet to join our movement and help us change football. We know that every one of us who becomes an owner of Lewes FC to change the way football conducts itself, is ultimately changing the world. That’s a lot of value for your fifty quid. 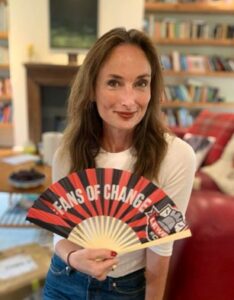 Karen Dobres has a unique voice on the Lewes FC Board as she had no interest in football before encountering the club’s equality initiative in 2017. Since then she regularly gives talks at business and sports conferences on equality in football and its effect on driving gender equality in the wider world.

Karen has also created the club’s SisterShips programme which is building a network of women’s organisations keen to support the club in solidarity with its equality stance, whilst the club promotes the member organisations’ work in return.

Karen is a writer and trained counseling therapist, including creating and managing an internal counselling service for PolyGram Records (now Universal). Prior to this Karen has also worked as a fashion model. A co-owner of the Club since 2010, Karen leads on the board for ‘Impact on the World’.