The Values That Unite Us

How correcting misperceptions of our values can lead to stronger communities

By Lukas Wolf and Greg Maio

Around the world, there is a variety of values or ideas that people cherish as guiding principles in their lives. These values are diverse and include such ideas as health, forgiveness, helpfulness, wealth and humility.

While we cherish our own values, we often assume that other people have different values from ourselves. For example, we might think that someone who is older than us cares more about tradition than we do and less about scientific progress. We may also make similar assumptions about differences between groups of people. For instance, we might think that women value benevolence and helpfulness more than men.

This tendency to categorise individuals and view them as fundamentally different is a consequence of our natural way of making sense of the world. However, this assumption can lead to division and even conflict in communities and beyond. For instance, affiliations with the two main political parties in the United States have led to deeply polarised stances over real threats such as forest fires and Covid-19. Because these threats typically require a concerted effort from society to tackle them, the divisions between groups lead to delayed and suboptimal responses to the threat and often introduce further conflict because each side is blaming the other. It is then particularly concerning that differences between groups are frequently exacerbated by politicians seeking to gain power through divisive strategies; by media groups which understand that a headline on what divides us sells better than a headline on what unites us; and even by social and life scientists whose conclusions commonly focus on mean differences between groups of individuals, ignoring any overlap. It is therefore important to evaluate how accurate this assumption is: Do groups of people in fact have fundamentally different values?

We can answer this question by assessing people’s values and then calculating the degree to which groups of people are similar or different to each other. When we did this for various groups in various contexts, we were interested to see that, instead of revealing fundamental differences, our findings showed that people share values to an overwhelming extent. We for example found that the vast majority of people agree on the importance of values such as security, benevolence, and protecting the environment.

We were particularly struck by the consistency of these findings. That is, we found large similarities emerging across a variety of groups, including young and old, women and men, and among teenagers with their peers. In other words, these groups had a lot more values in common than generally assumed. Perhaps even more surprisingly, we found this pattern of substantial similarities even for groups that are typically regarded as deeply divided, including US-Democrats and Republicans, and UK-Leave voters and Remain voters. For these groups, we generally found around 90% agreement on the importance of a range of values. 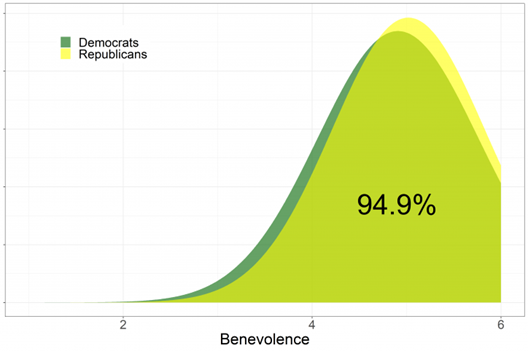 US Republicans and Democrats show substantial similarities of approximately 95% on values such as benevolence.

Related work measuring relevant social attitudes also agrees with this conclusion. Recent evidence from around the world shows that most people would not want to win an unlimited amount of money, suggesting that wealth is not as important to people as we commonly expect.

There is hence strong evidence that people have very similar values, but they commonly fail to recognise these similarities and instead assume fundamental differences. Interestingly, Global Action Plan found in a recent study among young people that this tendency to assume value differences with others is absent in children younger than 10, but from the age of 11, young people start to underestimate how much of their values they have in common with their peers, and this misperception grows with age.

Fortunately, we are beginning to understand how we can correct people’s misperceptions and help them recognise how much they have in common with others. For example, in the recent 2022 Summer Science Festival of The Royal Society in London, we created a brief values game in which visitors could guess values of other groups of people in society. Specifically, visitors gave their estimate of how similar versus different the values of groups were to each other, including younger and older people, women and men, and British Conservative and Labour voters. After each guess, visitors received feedback on how accurate their guess was by comparing the visitors’ responses to data from a representative sample of more than 2,200 people living in the United Kingdom.

It turned out that the majority of the 777 visitors who consented to us analysing their data substantially underestimated the similarities between groups. For example, while people assumed that women and men would show 67.7% agreement on the importance across all values, the correct percentage is substantially larger: 93.1%. This discrepancy between perceived and actual value similarity is even bigger for many other pairs of groups (e.g., Conservatives and Labour voters).

Importantly, however, after receiving this feedback, visitors improved their guesses considerably for the groups presented next in the game and came much closer to the actual similarities. In other words, their misperceptions were corrected and their stereotypes were reduced. Visitors also reported being more hopeful and optimistic that we as a society could work together to solve major crises, such as climate change and the current economic situation.

We chose hopefulness as an outcome because a sense of hopelessness about our future is a major hurdle for taking steps to address global crises (e.g., climate change, resource depletion), and these findings suggest that the incorrect assumption of societal division is partly at fault. We have also conducted other experiments that have shown other benefits of correcting people’s misperceptions. For example, we have found that it can increase people’s belief that members of two polarised groups can get along and become friends. We also found that it can increase people’s agreement with political statements, even if the statement came from the political outgroup.

Together, this research provides an engaging and easy-to-implement method for reducing misperceptions about others’ values, while increasing optimism and positivity in attitudes toward other people.

This research is also illustrated in this video, commissioned by The Royal Society (United Kingdom): 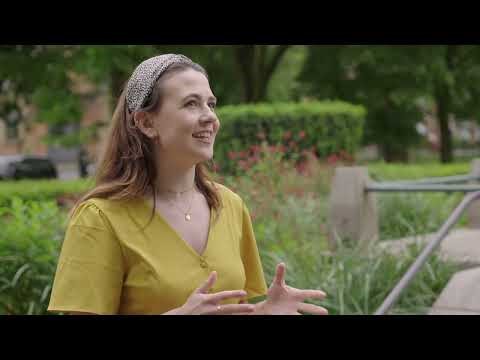 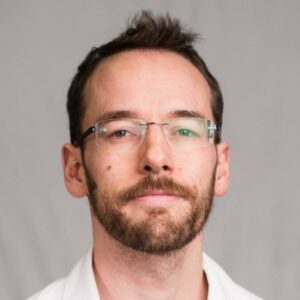 Lukas Wolf is a Lecturer of Social Psychology at the University of Bath. His published work focuses on (1) shared values and the role they play in bringing people together and (2) understanding adults’ attitudes towards young people. Lukas Wolf works on these topics in collaboration with several organisations including Global Action Plan, the European Commission’s Joint Research Centre, and the Children’s Society. 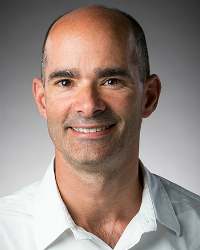 Greg Maio is Professor of Social Psychology and Head of Department at the University of Bath. He has published widely on the topics of social values, attitudes, and behaviour.  He is author of “The Psychology of Attitudes and Attitude Change” (3rd ed. with G. Haddock and B. Verplanken), author of the Psychology of Human Values (2017) and has been a lead or co-investigator for varied research programmes funded internationally or by the Economic and Social Research Council.